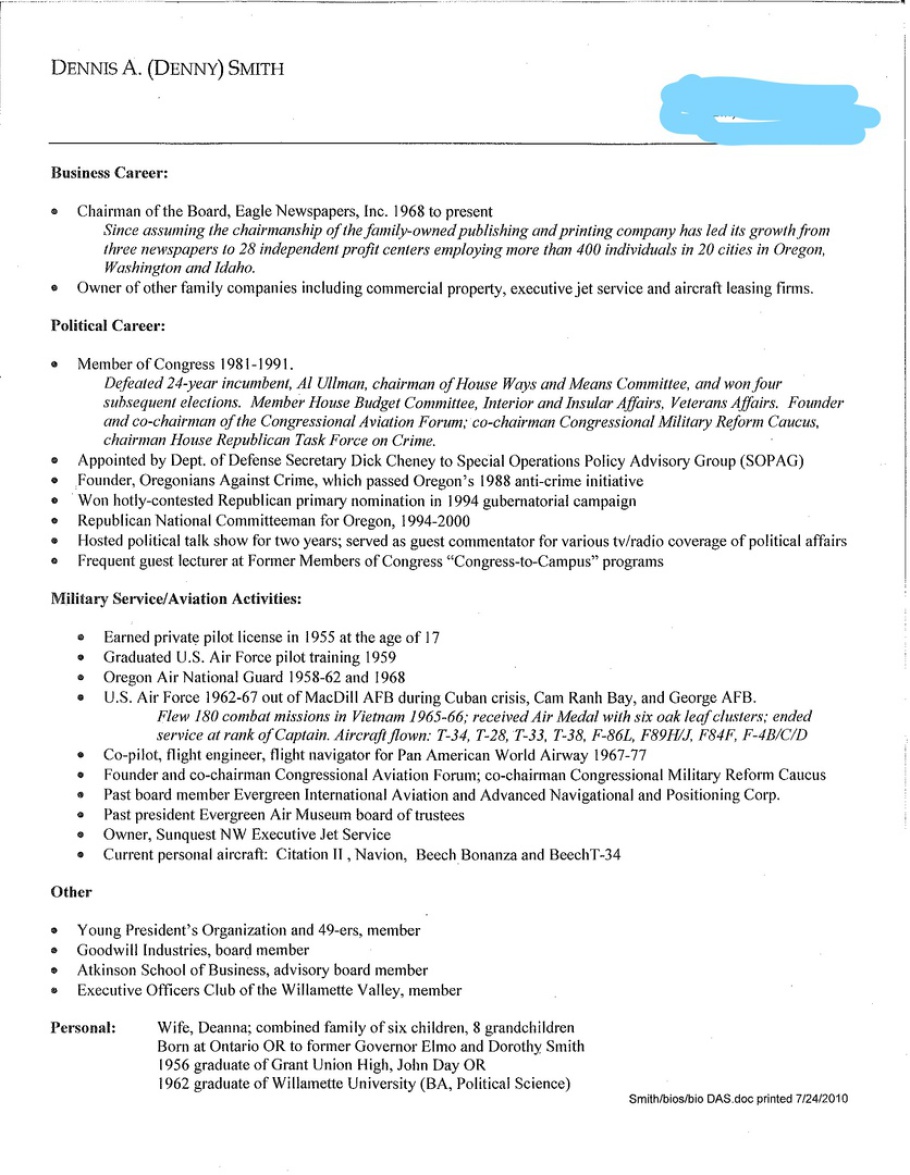 He is a fifth generation Oregon farmer from the Halsey/Harrisburg area, former radio broadcaster, former 12 yr volunteer fire fighter and small businesses owner. He is married to Peggy Sue, has a son and daughter in law with 2 grandsons and owns a farm north of Sublimity.

He stays engaged in grassroots politics as a consultant and advisor to candidate and initiative/referendum campaigns.

Jeff has served as an elected board member of the Sublimity Rural Fire Protection District since 2004, while also serving on the board of a non profit, Water for Life.

He started in talk radio in 2003 as a substitute for Lars Larson, then spent 5 years hosting a week day radio talk show during early morning in the Portland metro area, retiring in 2012.

In 2004 and 2006 Jeff was embedded as a radio broadcaster with Oregon National Guard combat infantry units in Iraq and Afghanistan, bringing live reports and interviews with Oregon Guardsman from various combat zones.

After retiring from the House of Representatives in 2007, he organized a team that built up the Oregon chapter of a grassroots political organization, Americans for Prosperity, with 32 local Oregon chapters and 25,000 free market activists. In 2011 he founded the non profit Oregon Capitol Watch Foundation, whose mission is to research and publicize wasteful government spending in Oregon.

Jeff has received numerous awards from conservative business and government watchdog organizations and is a founding member of the New Budget Coalition. He is a passionate advocate for common sense government budget reform and speaks regularly to various organizations on this subject.

Don has lived in the western states of Nevada and Oregon since 1985, moving from Ohio to work at the hospital in Klamath Falls. In 2000, he moved to Salem to work at the Silverton Hospital. He spent most of his career in hospital administration, including two hospitals in Akron, Ohio where he was born and raised. Don and His wife Holly moved to Reno, NV in July 2018 for retirement and to be closer to their two sons, who are raising families in Reno.

Don earned a masters degree in hospital administration from Trinity University, San Antonio, and a bachelor’s degree in psychology from the University of Akron. Most of his career has been in the nonprofit sector, with voluntary service on the boards of directors of organizations of arts organizations, social services, churches and others.

He was responsible for fundraising in the hospitals for major capital projects including cancer centers, birthing centers, heart centers, emergency department expansions, and other clinical services. He is experienced in major gift fundraising and grant writing. Don also learned about the workings of government when he served five years as Economic Development Manager for the Marion County Board of Commissioners.

As part of his active retirement, Don is licensed as a substitute teacher in Nevada, and is also a sports official for interscholastic football and basketball in the Reno area. He and his wife Holly raised four children and now have eight grandchildren.

Present      the client from conversations with the owners/management, making

recommendations based on information obtained, then installing the

Accounting systems utilized include ACCPAC PLUS, MAS 90 and others.  Setting up of full turnkey Novell networks including login scripts, network rights, mappings and security.  Licensed tax preparer for over 20 years preparing all types of income tax returns from personal, partnership, corporate, trust, etc. Training in accounting, installing and setting up programs in Windows. Doing Pre and post audit work for clients based on there need. Working with Clients CPA on discovery of suspected Fraud and embezzlement.

To          Part time entailed reviewing of bank reconciliations. Supervising the

of purchases for production, and working with sales for flexibility in

production for a “just in time” approach for deliveries. Responsible for

annual budget planning, and implementation. Reported to President of

Company. As Information’s Officer, I over saw all new software purchases,

installation, and training of personnel on them, this included the

(Trained on Lotus 1-2-3, etc.) Created a network for the CAD operations

software, which resulted in better reports for the Finance Department.

Assets and Depreciation Schedules, Budget Development and Planning.  Interfaced with Engineering for changes to Bills of Materials and Manufacturing Labor and Overhead Variances. Designed and Implemented a

contracts and interfaced with DCAA Personnel on pre and post-audit reviews.

Supervised a staff of three.  Accomplishments included conversion from a

and a fully-integrated system within eight months.

Verification of Sales and Margins, Analyze verification to Plan. Additional

and Cost Incurred. Worked in the audit department for 6 months on a fraud case related

July 1979    Cost standards creation and analysis for both inventory valuation, and

I am a 3 third generation Hawaiian-born in Hawaii. My Paternal grandfather was born in the monarchy of Hawaii, under Queen Liliuokalani and shortly after was overthrown by the United States and put under a governorship.

My maternal great grandfather was also born under the monarchy of Hawaii, under the then king Kamehameha the IV or the III not sure. Part of the family has roots with masonries sent to Australia but they never got there. Then were ship wrecked and returned to Hawaii to live and preach the word.

The overthrow of the Kingdom of Hawaii began on January 17, 1893, with a coup d'état against Queen Liliʻuokalani on the island of Oahu by subjects of the Kingdom of Hawaii, United States citizens, and foreign residents residing in Honolulu. A majority of the insurgents were foreigners.[4] They prevailed upon American minister John L. Stevens to call in the U.S. Marines to protect United States interests, an action that effectively buttressed the rebellion. The revolutionaries established the Republic of Hawaii, but their ultimate goal was the annexation of the islands to the United States, which occurred in 1898.

The Kamehameha Dynasty was the reigning monarchy of the Kingdom of Hawaii, beginning with its founding by Kamehameha I in 1795, until the death of Kamehameha V in 1872 and Lunalilo in 1874.[5] On July 6, 1846, U.S. Secretary of State John C. Calhoun, on behalf of President Tyler, formally recognized Hawaii's independence under the reign of Kamehameha III.[6] As a result of the recognition of Hawaiian independence, the Hawaiian Kingdom entered into treaties with the major nations of the world[7] and established over ninety legations and consulates in multiple seaports and cities.[8] The kingdom would continue for another 21 years until its overthrow in 1893 with the fall of the House of Kalākaua.[9]

Mr. Loftus represents clients on a wide variety of transportation matters both in commercial transactions and before the Surface Transportation Board, federal and state courts and in arbitration and mediation proceedings. Agency matters he has handled include cases challenging the reasonableness of rail carrier rates, competitive access issues, rail merger proceedings, fuel surcharge issues, rail equipment leases, demurrage issues, determinations of common carrier status, and rail spur permitting and constructions, among many other issues. Court litigations and arbitration or mediation matters have typically involved rate, rate adjustment, liquidated damages, force majeure, service or other terms of contracts for rail or other modes of transportation; and price, change of law or other price adjustment, quality, force majeure or other terms of coal or other fuel purchase agreements. His commercial practice has involved numerous engagements assisting clients with negotiation, renegotiation and administration of, rail transportation contracts or common carrier arrangements and fuel supply contracts.

U.S. Court of Appeals for the Fourth Circuit

U.S. Court of Appeals for the District of Columbia Circuit

Various other U.S. Courts of Appeals

U.S. District Court for the District of Maryland

Supreme Court of the United States

●       Will be pursuing a M.S. in Human Anatomy at University of College Cork, Cork Ireland, starting September 2019.

●       B.S. Human Physiology with honors and a minor in Music Studies at the University of Oregon with a 3.7 GPA.

●       Undergraduate Learning Assistant of the Year for 2018: Department of Human Physiology and Anatomy at the University of Oregon

●       Diversity Excellence Scholar for the University of Oregon

●       Member of the Eugene Symphony Chorus

Managed the restoration of a Queen Anne historic home, installing a commercial kitchen and opening a café in 2008. Recognized nationally as an award-winning cafe by TEA TIME magazine in July 2012, and TEA HOUSES OF THE NORTHWEST as one of the finest tea houses in the Pacific Northwest. Featured in Gerry Frank’s book “Oregon,” editions 1-4.  Responsible for all aspect of owning, managing and operating a successful minority-owned small business in Stayton, Oregon.

Actively tracked, reviewed, researched, advised and educated individuals, organizations and legislators on complex legislative issues that affect businesses and property owners’ interest by conducting overt or covert public awareness campaigns designed to shift public policy from a grassroots level. Primary media contact and public speaking at community forums on the legislative issues and before the Oregon Legislature and local government.

Initiated first contact and trained outside sales force in the sales and marketing of neuromuscular nerve stimulator designed for both clinical and home use.  Demonstrated product features and benefits directly with physicians, nurses, physical therapists, and patients.

Used telemarketing and outside sales methods for new highway safety product under the supervision of senior management.  Created budget for travel, trade shows, marketing, sales, and advertising.  Traveled extensively on sales calls to city and county transportation engineers.  Coordinated event planning and set up displays at regional and national trade shows in the United States and Canada.  Worked directly with federal, state, county, and city transportation agencies.  Acquired and assisted in compiling a database of bridges across the United States that would qualify for TEA 21 funds (Transportation Equity Act of the 21st Century) for product sales.

Justice for All, Finance Chair

Negotiated cost of goods and managed strategic alliances with major OEM manufacturers, such as IBM, Cyrix, Maxtor, and Samsung for manufacturing facilities in Japan and the United States.  Directed sales of computers and computer peripheral components in excess of $4.5M a month in foreign and domestic markets. Managed purchasing projects in excess of $2M per transaction.  Coordinated delivery of products purchased offshore to manufacturing sites in the United States, Japan and Singapore. Trained, hired, directed, and evaluated staff.

Negotiated and managed inventory control and flow of products into the ComputerLand retail distribution channel.  Coordinated delivery of individual computer components purchased both foreign and domestically to manufacturing sites in the United States and Korea.  Created, managed and trained both domestic and international sales force to maintain and manage distribution channels for computers and peripheral products.  Directed both the purchasing and sales of computers and peripheral components in excess of $3,000,000 a month in both foreign and domestic markets managed sales and technical support operations.

Responsible for on site security for construction phase and operational phase for large retail shopping center for Homart Development, the parent company of SEARS in Oklahoma and Texas. Provided bodyguard services to Olympic athletes and celebrities, trained local work force in day to day operations for clients needs.  Worked with local law enforcement to effectuate arrest of a suspect, testified at deposition and trial on behalf of clients and law enforcement to secure prosecution of the suspect.

Finance Director for Justice for All PAC

Fundraiser for the Marion-Polk Family YMCA.

We are excited to launch this mobile museum platform off the ground! With your support, we will be able to go into schools and give students a hands-on experience to attract, inspire and educate our future scientists and explorers.